I hope you won’t read this as just a father gushing about how talented his son is. Of course I’m proud. I’m also amazed and astounded that some aspect of my decades-long involvement with PowerPoint is now carried on by what is literally the next generation here.

But I’m getting ahead of myself. First a bit of product announcement, then you can decide if you want to read about the back-story.

Neo / Ipsum is a tool for PowerPoint users who need to quickly check or evaluate a presentation slide or template without having to fill it in by hand. 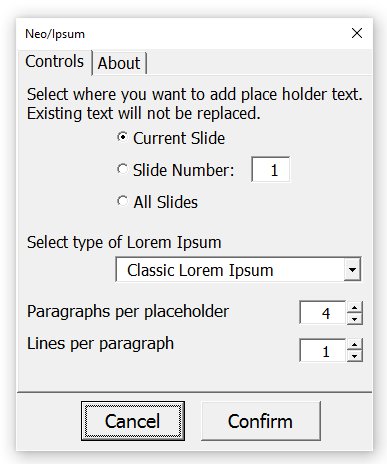 It does this by adding “filler text,” known as Loren Ipsum, to empty placeholders. This lets you see what the slides will look like when you’ve actually added your real content. (Of course there’s nothing that says you can’t try to present using Neo / Ipsum text, in fact it might make for a fun office party activity!)

Of course, the neo in Neo / Ipsum means new. So there are multiple styles of Ipsum collections to choose from. The initial release includes:

Gaming – Related to electronic and board games

Now PowerPoint power users know that you can type =lorem(3) in any placeholder to add lorem ipsum text to a placeholder. It works, but it’s kind of boring and limited. Neo / Ipsum takes filling your placeholders with text up to the next three levels. 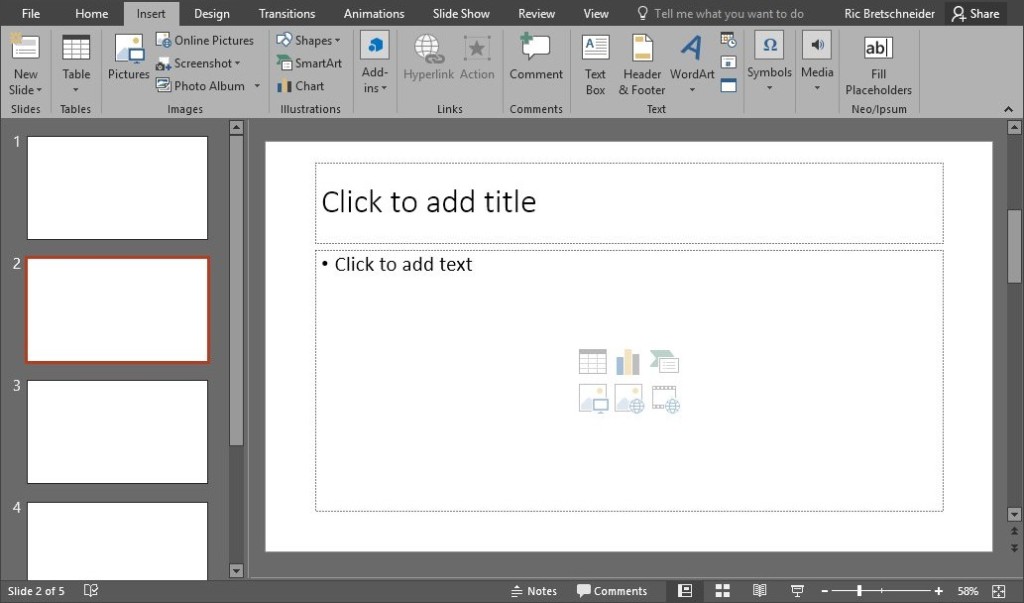 Three clicks takes you from this… 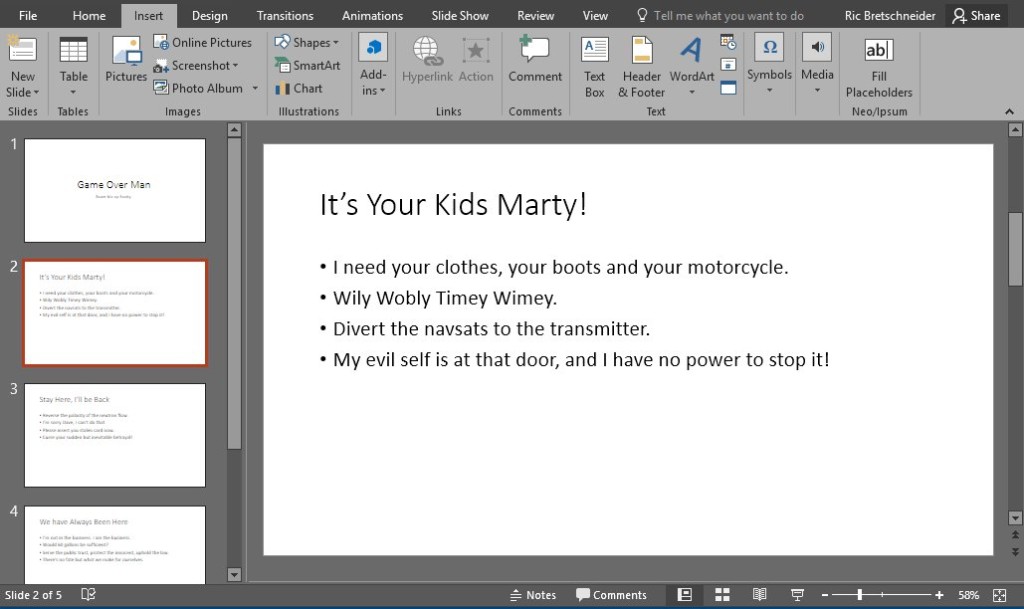 And what could be better than that?  Well, how about this. Neo / Ipsum is free. No charge. Enjoy. I think you’ll agree that not only is this a useful tool for PowerPoint designers and users, but it’s actually a lot of fun to use. And you can’t say that about many utilities.

Oh, and if you want your own custom ipsum version, the cost for that will be quite reasonable. Yeah, we’re talking buying your work group a round of lattes reasonable. You can ask 2D10 Development to build a version just for you!  If you want a version for Macintosh PowerPoint, let him know – it’s an ongoing evaluation.

And now the personal story…

If you follow this blog there’s a good chance you know that I worked on multiple versions of the PowerPoint application at Microsoft over 17 years. That represented a large portion of my son Justin’s growing up, and I often apologize to him for the nights and weekends I was working on getting the next version of PowerPoint finished instead of throwing a baseball around. OK, we’d likely have played more video games together than playing any sportzball, but time lost to work is still never recovered.

During that stay on the PowerPoint team, I was one of three or four of developers who coded PowerPoint features using the brand-new-not-ready-for-prime-time Object Model and VBA. It’s totally OK if you don’t know what that means. VBA is a way that people can create additional functionality that shows up in PowerPoint, also known as “add-ins.”

Yes, I’m guilty of creating the AutoContent Wizard in PowerPoint 2000.

I’ve always told him that as a programmer, his skills were applicable to a diverse number of applications. To that point, a few months ago I suggested he look at the Office Object Model and VBA development tools, and give them a try. I also gave him the kernel of the idea that turned into Neo / Ipsum. I pointed him at a couple of potential mentors should he get stuck, but that’s about all I did as far as teaching went. He learned 99% of what he needed to finish this project entirely on his own, although I do believe he learned a couple of programmer-approved swear words that weren’t previously in his vocabulary. (Microsoft’s Object Models have that effect on everyone. Ask anyone.)

Justin and I had daily meetings to go over his progress. I gave feedback, and suggested improvements, just like any pointy-haired boss might provide. But I didn’t touch one line of code here. It’s all Justin’s. And I’m very proud of what he did in a strange (really strange!) development environment with tools he’d never laid hands on before.

And of course, he’s available for hire should you need someone to code a game or PowerPoint Add-in. In the meantime, hope you enjoy Neo / Ipsum.

Don’t be shy about sending feedback – Justin does expect to do a second version with a few tricks that didn’t make it into this release.