A post-modern romantic comedy about luck and timing in relationships, missed opportunities, unrequited love and how the grass always appears to be greener on the other side…

My Cinequest 2016 viewing started out with one of the more evocatively titled films on the schedule. The Effing, is a casual reference implying casual sex. Or at least as casual as things can be when multiple Friends are involved. It’s indeed a plurality of friends with benefits.

Of course the film makes sure it does not disappoint on either counts. Although the entirety of the cast can be counted off on one hand, the combinations and complications within are of course limited only by a plot where most of the characters are more than curious about sex with each of the others. But this isn’t really a story about mathematics. 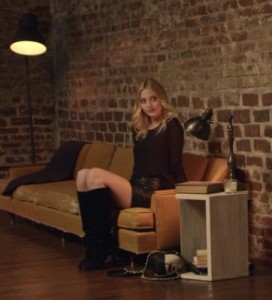 Jacob and Steve are childhood friends, now locked in their roles as manchildren. Each approaching sex and relationships from slightly different angles. Steve is dating Laura, a long-term relationship, but is in no means faithful to her. Jacob is a copyeditor, introduced to a writer Sarah, by Laura. The writer needs editing; Jacob almost immediately decides he needs Sarah. But then just as suddenly he becomes intrigued by Sarah’s roommate Camille. He effs Camille almost immediately as she’s about to leave the country; his limited opportunity forces his hand so to speak.

Camille gone, Sarah and Jacob settle down to their own long-term relationship, just as Steve and Laura end theirs. With each break-up, new patterns emerge and of course new opportunities are explored. Sarah and Laura are still friends, and after an evening of too much wine…

This is a sexy film that takes the “friends with benefits” motif to the next level. The attractive cast is at once playful, sensual, clinging, exploratory, resentful, and questioning. Jacob is at once the most and least stable of them, although speaking to the beneficial aspects of a monogamous relationship, is continually tempted and giving in to the same temptation. This contrasts well with Steve who seems out of control, but is honest about his crazy impulses and trysts.

While this could have easily been a small ensemble stage play, director Quincy Rose provides us with a cinematically active yet relaxed view into these lives. The gentle sway of Howard Wexler’s hand-held camera is just enough to invite us into the kitchens and bedrooms of these friends. It’s intimate, as is appropriate, and draws the viewer into these stories.

Quincy Rose’s writing is light and clever. The story is fairly simple, but still captivating. We know the inevitable discoveries of lies and histories await as both are accidentally and purposefully disclosed by the players. Again, there isn’t anyone here who is actually a bad person, (well maybe one has bad-ish tendencies), they’re all just looking for something more than they currently have. And they’re willing to look everywhere. And it’s very entertaining to watch them look.

This is my first must-see film for Cinequest.

It’s film festival season again! Cinequest 2016 starts on March 1st, so if you’re in the San Jose / San Francisco Bay Area you might check out the films and events for this year.  And watch here and at Fanboy Planet for upcoming reviews and podcasts from the Planet’s crew.