A Favorite from Cinequest 2014: Nothing in Los Angeles

I’ve always regretted not writing a full review of one of my favorite films from the Cinequest film festival in 2014. Nothing in Los Angeles was one of the most entertaining and satisfying films I saw that year, which is saying a lot as Cinequest never fails to bring in a ton of innovative, inspiring, thought-provoking, and amazing films to San Jose. 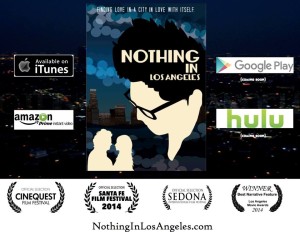 Nothing in Los Angeles

I could go on and on about how you really missed out in not seeing this during the festival. Yeah, independent films are often hard to run down and I typically feel like I’m teasing the reader when I tell them how great a film was… that they missed.

But today, I’ll simply point you to a number of online sites that host the film, and recommend you treat yourself to a viewing.  Personally, if you already are a member of Amazon Prime, I’d go there because it’s a free viewing (at the moment).  But it’s also available on iTunes, and are promised to be available on Hulu and Google Play soon.

Oh, and here’s a trailer!

So, you have my recommendation, it’s simply an engaging, witty, and well done film.  Your viewing time will be well spent.

And just fair warning. It’s film festival season again! Cinequest 2016 starts on March 1st, so if you’re in the San Jose / San Francisco Bay Area you might check out the films and events for this year.  And watch here and at Fanboy Planet for upcoming reviews and podcasts from the Planet’s crew.

And if you’re curious, here are my Cinequest reviews from prior years.