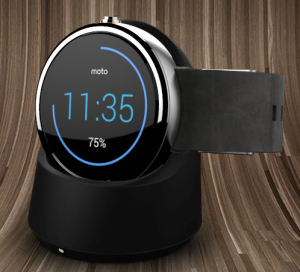 Looking at the otherwise seductive Moto 360, I’m struck by the beauty of the watch and the confusion it represents.

These new “wireless” chargers sound like electricity will be broadcast to the device, through the air, which is technology that isn’t practical given today’s research and prototyping.  I recently bought a Lumo Lift (which I’m very unhappy with, but  that’s a column for another day) which also has a proprietary and ridiculous wireless charger.

In fact, these inductive chargers are wired, and worse they’re not consistently created.  With few exceptions devices require a proprietary and unique-to-the-device dock or other housing for the inductive charging to be made. 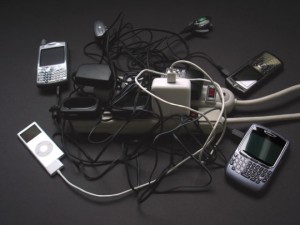 So what’s the problem with that?  Well, there’s starting to be a very crowded amount of space on my physical desktop for these devices to sit and glow as they recharge, and most of these inductive devices require daily charging so hello docklands.  It’s really kind of absurd looking when the docks are sitting there empty. The idea of setting them up when you need them puts the whole “wireless” thing to an absurd test of practicality.

This is to say nothing about packing these docks up and finding plugs for them in hotel rooms when you travel.  Forget about it.  And want to keep a charger at your work?  These are never bargains to buy a 2nd one, even when they offer spares for purchase.

A few years back all phones and most devices in the US had different plugs, requiring you to have multiple chargers with different, typically company-specific, tips on them. There are laws in Europe that require standardization. Of late there’s been progress towards standardization on mini-USB as a charging type and USB power levels eliminating the need for even a standard-plug charger.  You can travel with a few USB cords and many hotels are even providing USB power plugs on desks or lamps for the traveler.

But if this horribly misnamed “wireless” fad catches on it will be a big step backwards for us all.  Not wanting to sound too “you kids get off my lawn” on this, but setting standards for and requiring manufacturers stick with them is always in the best interest of consumers. When it gets abused, the customer suffers.

And that’s why, while I love the looks and function of the Moto 36o, I won’t be getting one for my birthday or Christmas.