Death By PowerPoint? No Such Thing.

his is the first time I’ve used the phrase Death By PowerPoint in a title, and it will be the last. Why? Because the phrase is so fraught with bold stupidity I refuse to endorse it. Death by PowerPoint focuses failure away from the real source of the problem. It actually hides the problem it purports to expose. It’s the ultimate look over there of inept redirection in presentations.

And yet, it gets used by so many hacks to draw attention to articles that basically regurgitate other articles advice as if they had discovered a new untreatable virus. If you subscribe to any number of presenting social media groups on LinkedIn, Facebook, Twitter, Reddit, et. al. the day doesn’t go by when you see the phrase in someone’s update. “Saving You From Death by PowerPoint!” “Five Simple Things You Can Do to Prevent Death By PowerPoint!” “I Was Hitler’s Alien Death by PowerPoint for the CIA!” The list goes on and on.

And it’s all rubbish. And you really should know it’s rubbish. We shouldn’t even need to have this conversation. But you’ve read so far, so I’ll make it worth your while. Let me break this down for you with a story about fancy writing.

There’s an art, an amazing art, called Calligraphy. It’s been practiced since the Middle-ages, maybe earlier – it gets fuzzy when it actually began and where, but stating that it at least goes back to castles and monks working tirelessly sitting behind desks illuminated by candles is far back enough to give it a sense of gravitas. Calligraphy is about writing, not the composition of phrases but the techniques used in the composition of individual letter characters. Appropriate to the times, it was originally accomplished with the crudest of tools, literally split feathers and ink made out of whatever organic substances were native to your area that could be used to permanently stain paper. But sprung from such rudimentary tools the results were so beautiful as to be inspiring.

Now to compress the timeline a bit, the Renaissance came and went, the mechanical revolution brought us black lung disease and moveable type, and so forth. Technology eventually moved 99% of all communication* to glowing dots on a computer screen. Today calligraphy is primarily practiced as a hobby, rarely one that pays, even though it can still be used to create amazing and lovely works. 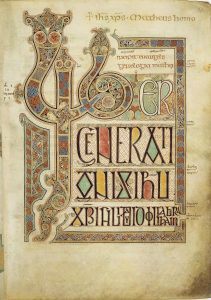 By Eadfrith of Lindisfarne

Of course there are two types of calligraphers. Those who diligently learned, practiced, exercised, trained, disciplined, and basically worked at it until they developed the skills. With practiced and controlled motions, they know what stroke to use in every occasion to lay ink down on paper in just the right way as to be beautiful.

And then there are those who haven’t learned. Haven’t practiced, exercised, trained… who basically want to do the art, but not bad enough to sit and draw parallel lines and curves for a couple of hours to train their hands and minds.

There are some astonishing tools available to both types of calligraphers. Fabulous pen barrels, a seemingly endless variety of nibs, a full spectrum of inks, papers, portable surfaces, and additional accoutrements. Anyone with a small amount of money and a desire to own them can basically afford an impressive armoury of Calligraphic weapons. And both the practiced and unpracticed head off to stationery and boutique shops to bring home the latest tools to try out on a regular basis. 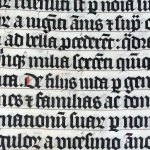 At this point you probably see where I’m going with this, but let’s finish anyway. Stick with me.

So both the practiced and talented calligraphers and the, well let’s just call them the dilettantes, use the same tools and get different results. Seems rather obvious, right? And only the most ridiculously self-deluding dilettante looks at their sagging and inconsistent scribbling and says “wow, I sure bought the wrong tools for that!” (Well, in fairness they may have, but that’s not really the point.)

So what is the point?

Like calligraphy, presenting at its core has nothing to do with special tools. Yeah, you can have fun quoting the guy who worked developing the PowerPoint program for 17 years on that bon mot. Presenting is about three things: Collecting information, fashioning an argument with that information that will move their audience 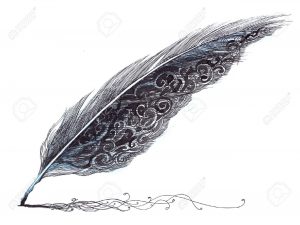 , and delivering that information to the audience. It doesn’t matter how you’re delivering the presentation. You can present compellingly without slides, with slides made of sheets of paper, or with a computer program that projects compelling arguments on a huge wall behind them. Practically any method can be just as powerful as the others.

What matters is the amount of skill and effort that is brought to bear in creating and delivering that argument.

Tools can assist in creating and performing a quality presentation. There’s no doubt of that. But tools do not do your research for you. Tools do not supply the skill to compose. Tools cannot replace thinking about your audience’s resistances and goals. Shiny and bright tools, most dangerously, often make you feel accomplished enough you forego practicing. This is not the tool’s fault, you’re simply delusional if you don’t practice. Never fail to practice. Never. Fail. To. Practice.

PowerPoint, for all its magical animations, fabulous color matching, ability to adjust your message by moving blocks of the argument around easily, is still no smarter where it counts than a fountain pen. You can get beautiful results with a fountain pen, or you can create ugly blotches of ink on your clothes that no amount of laundering will remove. And while PowerPoint is unlikely to send you to the dry cleaners, it can be used to create ugly blotches of memory or beautiful experiences depending on how you use it.

Wake up. The tool didn’t put this guy to sleep. The presenter did.

The difference is you recognizing that there are no short cuts. There is no magic in creating a good presentation, other than the magic you bring. No tool will make it happen. It’s much simpler. It comes down to the amount of actual work you put into making yourself a presenter, and the effort you put into each and every presentation, each and every time you step in front of an audience. Time, effort, skill, and persistence, that is what makes perfection.

Remember.  The only thing that is going to kill that audience is you. You have the choice: you can make them wish they were dead**, or you can simply knock ’em dead. Both will be remembered, and the tool won’t be the reason for the result.

*Plus or minus 60% just to be on the safe side.
**To be fair, they’re actually wishing you were dead.
*** Bonus hidden blog; copy this blog into your favorite text editor and global search and replace “PowerPoint” for “Keynote.” It’s just as valid. Same with Prezi, same with…
**** Oh, and tomorrow I’m going to tell you how to get a little magic in that whole presentation construction part of being perfect.  Check back tomorrow.  Or just hit that Subscribe link and I’ll do it all for you. Like magic.

2 Responses to Death By PowerPoint? No Such Thing.