Pointer Points for PowerPoint (And Keynote, and Excel, and…)

In my time designing features on the PowerPoint team, one of my favorite “secret” features was the built-in laser pointer. The fact that its a secret also means it’s a failure, because we made a nice feature that to this day few people know exists.

Because of this, I need to demo it for you right now, just so you can have some context for both my shame, and my specific interest in this area.

So, pretty cool, right? You’ll use it the next time you need it right? If you remember.

So, it’s a great thing to have in a pinch, but it doesn’t really eliminate the need for an regular laser pointer, they don’t require you to be at the computer with both hands free to work the computer. And we haven’t really needed a separate laser pointer for quite a while because any decent hand-held presentation remote control has a laser pointer built-in.

Except for the pointer that recently arrived in the mail. And it’s my new favorite.

Logitech’s Spotlight Presentation Remote, is a sleek bit of design and manufacturing. Available in silver, slate and gold colors. It’s very “minimal” having only three buttons. 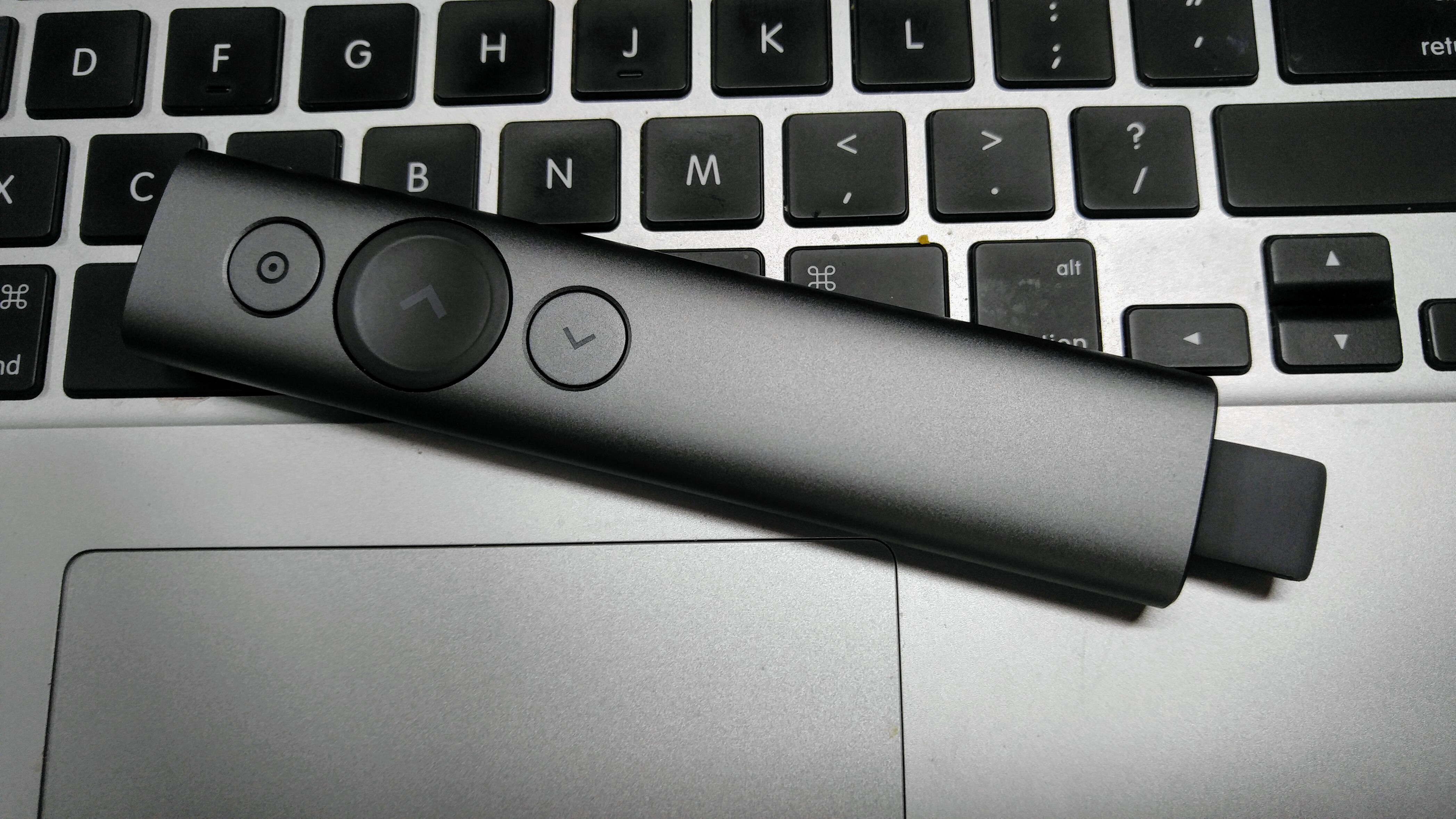 Minimal design is terribly important to me when it comes to presentation remotes. I get questions all the time from companies designing them. They want to know what PowerPoint can do, what sneaky trick in the software would make a great new feature in their remote. They want their remote to have a unique selling point over their competition. And they think that adding more feature-specific buttons and adding things like virtual mice to their pointer is going to make their sales improve.

And maybe it does, but in the end I wonder how many of those special buttons get used, and how many are just sitting there waiting to accidenally confuse the presenter. So my answer to these designers is always something to the effect of: Presenters are in a terribly stressful situation, up there in front of an audience, and they need things to be kept simple. Keep your design simple, make it so they don’t have to think about it, that it just works and they can concentrate on their presentation, and you’ll win.

And that’s kind of what Logitech has done here. Understand though, this is a fairly complex bit of hardware, it just shields the presenter from potential confusion very well. Mostly this is because Logitech has put control of the pointer’s configuration, the the complexity of the device, into the support application. You can literally turn off what you’re not going to use in that software.

Setup and configuring is easy. Here’s a quick demo of their application.  It’s fine if you want to skip it, you can trust me on this, it’s easy and pretty cool.

The actual Spotlight remote feels good in your hand. Not exactly form-fitting, but solid. Its burnished metal surface and contoured main “advance” button are both pleasing to the touch and provide enough tactile feedback to be functionally orienting. OK, that’s enough geekspeak. Holding it is nice, and you can tell which end is up without looking.

As I mentioned, there are three buttons clustered on the surface, the spotlight button on the top, the larger and sculpted play/forward button in the middle, and the back/previous button at the bottom. The only other thing you’re going to notice is the rubberized fabric strap on the base that is connected to a removable dongle.

The dongle allows you to connect to computers that don’t have Bluetooth, so enough said about that, but it also covers the charging port. The charging port itself is the newish USB-C, and the remote comes with a 5.5″ charger cord with USB-C on one end and standard USB on the other. With a 2.5 hour charge, Logitech says you’re going to be good for 40 days. I’ve only been using it for a few weeks, but it hasn’t gotten down to the red blinking light yet.

To use the Spotlight, you need to install a nifty application (Windows and Mac) that is at the heart of making this a superior pointer. Takes just a moment, and in my experience hasn’t caused any problems with other applications or devices.

So let’s see a quick demo of the Spotlight in use.

It’s kind of important to note that the Spotlight manages all of it’s control through the use of a motion sensor, an accelerometer, and a gyroscope, all built into the control.  This means that the control doesn’t actually know if your facing out toward the audience, likely using your laptop to monitor what’s happening on the screen behind you, or facing the larger screen itself.  There’s no orientation to worry about. This means, unlike a laser pointer, you could point out something on your screen without having to face the screen that your audience is viewing. I’m not really sure if that’s as intuitive as it might sound, I think the audience may want you physically involved in pointing something out on their screen as a shared experience, but I’m kind of anxious to try this technique out soon.

As I mentioned, this works for both Mac and Windows, but it also works for Mac & Windows; I did most of my initial testing on a MacBook Pro running Parallels so I could use Windows PowerPoint on that laptop. Even though I only installed the Mac version of the Spotlight software, the product worked great in Windows as well. This was a welcome surprise.

And of course, because the pointer software is integrated at the system, instead of the application, layer, it worked with any application I tried. This is important because there are actually people out there who present using Excel. I’m personally not going to try to shame them, but I am happy that I rarely have to sit through such presentations myself.  Of course it also means that the pointer should work with web-based presentation applications, like Microsoft’s PowerPoint Online, Prezi, Google Slides, and whatever similar applications have come out while I’ve been writing this.

So the upshot:Logitech’s Spotlight Presentation Remote  delivers on every level promised. It seems ready for anything, and the fact that so much of its smarts are tied to software that should be able to be updated and expanded appears to future-proof it quite nicely. I highly recommend this any presenter.

Disclaimer: I received the Spotlight Presentation Remote for free from Logitech for the purposes of this review. But, frankly, it’s in the price range that I would have bought it anyway and returned it if it hadn’t lived up to its claims. Of course, it did live up to every claim, I’m happy with it, and they can’t have it back now. Sorry, I’m keeping it. Hope you guys understand.

1 Response to Pointer Points for PowerPoint (And Keynote, and Excel, and…)