Review: Carson of Venus: The Edge of All Worlds

Can I tell you about a unique book experience? I’m going to work hard to spoil none of the book’s surprises, while telling you why this is a book you should enjoy.

Consider a prolific writer, now long passed, whose legacy lives on beyond the words he wrote. Consider almost 80 novels written by Edgar Rice Burroughs, even more created by those who want to extend the legends he created. But know that until recently, the official canon of novels was limited to those penned by Burroughs himself.

But now, there’s new life being brought into these epic stories. Several existing books, written by authors other than Burroughs, have been deemed worthy by Edgar Rice Burroughs, Inc. and have been accepted into official canon. More astonishing, four new novels have been commissioned by modern authors to extend the stories with new adventures and new connections between the worlds Burroughs created.

Let me tell you about the first of these; Carson of Venus: The Edge of All Worlds 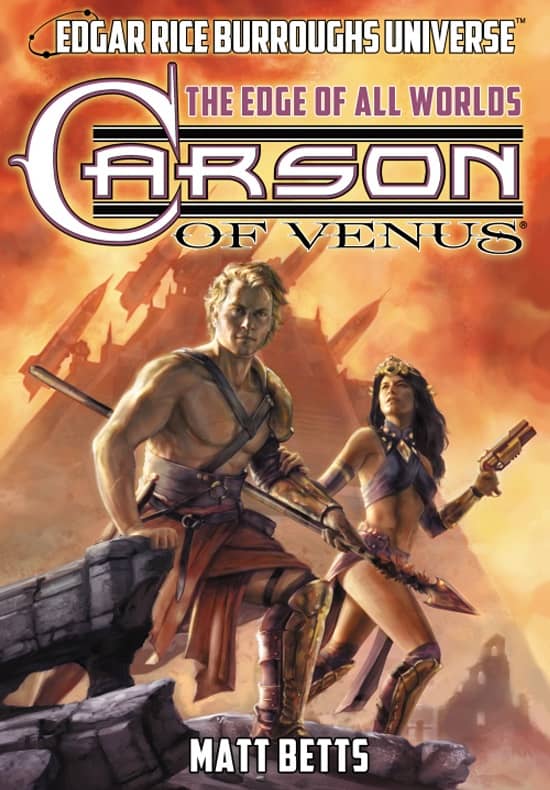 Carson of Venus: The Edge of All Worlds

Not as famous as Tarzan lord of the apes, or even John Carter of Mars, the story of Carson Napier and his adventures on cloud-covered Venus have only been available in Burroughs’s five original books and a few comic book series. Carson is a distinctly different type of hero than those most of us think of when we consider the amazing civilized savage Tarzan, or the human superman on Mars that is John Carter. Carson is much more the everyman, in fact he’s somewhat prone to falling into troubles far beyond his ability to deal with them. Even out of his element, he is no less dedicated and heroic in dealing with otherworldly dangers to himself and the people he cares for. Perhaps this all adds up to make him a bit more believable.

So, it’s very cool, and a little risky, that this new set of novels starts with Carson of Venus instead of one of Burroughs’s more powerhouse and well-known heroes.

Now if you read and enjoyed Carson’s prior adventures, I have a simple review for you: Go get this book. It is a worthy extension to the series. Without sacrificing the pacing and style of the prior efforts, new Burroughs author Matt Betts successfully refreshes it with a light touch of modern sensibilities that does nothing to detract from his success at emulating what we love about the originals. You can stop reading now, go out and get this book.

On the other hand, if you’ve never spent time under the perpetual clouds that cover the lands and seas of Venus, or if you’re suspicious of “pulp hero adventures” being too juvenile or out of touch with modern adventures, let me assure you that this is a rich and well-told tale.

Part of the charm of Edgar Rice Burroughs stories comes from the fact that they were originally told in segments, installments in magazines that were later collected into novels. This provides a tale told in installments, no less cohesive in its whole, but satisfying in smaller sections. This makes for a great reading experience, and very accessible whether you’re a reader who stays up until 3am to finish a book or one who reads a few chapters a day. Unlike many of the unofficial Burroughs series follow-up authors, Betts honors this style in his pacing and storytelling more than I might have hoped possible.

Another trademark of Burroughs fantastic tales was his world-building. It’s hard to make us believe, given scientific exploration and examination that has occurred in the near century since the series began, that we’d find anything habitable on Venus. Betts brushes that aside, continuing and expanding upon the elements that Burroughs used to make the reader to believe in Amtor, the local name for Venus. Besides the already noted weather, and the well populated seas and lands Carson finds himself in, Burroughs was prolific in creating language, linguistical and grammatical rules for the same, and distinct and consistent conventions of life for all the native inhabitants. Betts tale takes us into both familiar and previously unexplored territory here. And he does so both consistently honoring the earlier works, and extending the flora, fauna, lifestyles, and language of the inhabitants. So consistent is this work that few readers will be able to tell what is repeated and what is new to this volume’s story.

Which leads us to the story.

Long established in both the lands of Carson’s allegiances, his firm friendships, and the traditional romantic entanglement, the story starts with the core characters mid-journey. We’re reintroduced to several friends from prior novels, as well as the character Duare, who is the Jane to Carson’s Tarzan. No, we’ll not go there. Duare is much more a partner in adventure to Carson, and we often find her to be wiser and more war savvy than her Earth-born partner. Conversations and ruminations on Carter’s part fill in the backstory for those who are new to the series.

Ironically, Tarzan and John Carter play foundational roles in how Carter came to be on Venus. And it was in a poorly planned attempted trip by Carson to journey to Carter’s Mars that he accidentally crash-landed on Venus. Not much of the early novels is actually given away in this, just what we need to enjoy this story, so those are still available for the enjoyment of the reader. Carter reveals no real spoilers. Instead we’re introduced to a number of new mysteries, including some whose solution will have to wait for future novels. This too was a Burroughs trademark, as he littered such story seeds through his novels to the delight of readers who love tracking them back through prior works.

So, with a mysterious threat to be investigated, Carson and crew head off into new lands of Amtor, encountering fantastic beasts, cities, machines, and people both helpful and threatening. Again, without saying too much, the tradition of including the “noble opponent” who eventually becomes an ally is honored, as well as the counterpoint in an unrepentant and over the top would-be world conqueror. Betts builds characters that successfully stand side-by-side with those who came before.

As noted earlier, Carson is neither the canny jungle savage, nor the Mars-visiting superman. He’s a bit more of an everyman falling from one catastrophe to the next. He certainly wakes up trapped more than most heroes yet is fairly clever about getting out of a spot of danger. He is often the advocate of “going around” or retreating. And he beats the odds on the fortunate appearance of another character he knows or with whom he is able to ally. No less a brave hero, still Carson is definitely one of the funnier as he tries to talk a threatening giant warrior out of smashing, slicing, or otherwise disposing of him. In one memorable scene, as a new angry group is arguing about what to do with him, he glibly offers to solve their problems by simply walking out the door. They don’t take him up on it, but it is an exchange worthy of Spider-Man or even Big Trouble in Little China’s Jack Burton.

And we must remember that this is the first book of what these new Burroughs’s authors are calling a “Super Arc” of story. Several parts of the main novel, and the short story that follows, introduce us to an additional pair of characters. Inventor Jason Gridley from Burroughs’s Pellucidar series is reintroduced along with new character Victory Harben, and both will appear throughout the super arc to tell their tale. This begins in Christopher Paul Carey’s Pellucidar: Dark of the Sun, which is included as a postscript to this novel.

So, to summarize, a great escapist read. One that can, if you let it, lead you to pick up some older novels to catch up on the backstory, while it leads you forward into the new novels that will extend Edgar Rice Burroughs legacy of extended stories of strange lands and incredible adventures.

Venus waits for you.

Notes:
This review is written after having read an Advanced Reader Copy provided to yours truly in return for an unbiased and honest review.

See Derek McCaw and my video reviews and interview with Christopher Paul Carey, writer/editor and Director of Publishing at Edgar Rice Burroughs, Inc at http://fanboyplanet.com/video-carson-…

More information on The Edgar Rice Burroughs Universe and additional upcoming novels in this series can be found at http://edgarriceburroughs.com/erbuniv…